CURRENT SURPRISE COMPETITION (OPEN TO EVERYONE)

I CAN SEE CLEARLY NOW

WHAT TO DO: Write a story
THEME: I can see clearly now
TITLE: Don't label your story with the theme
LENGTH: No more than 5000 words
FEE: £1.23.  Cheque payable Mrs C Carr or PayPal button
CLOSING DATE: 1 November 2020
PRIZE: It's a surprise
NOTE: The theme could be to do with sight or understanding

The competition is open to everyone.  The winning story (and winner's name) will appear on this website as well as in the January 2021 issue of Crystal.  Non-Crystallites can buy a copy of that issue for £3 if they wish.

You can email your entry to christinecrystal@hotmail.com or post it to 3 Bowness Avenue, Prenton, Birkenhead CH43 0SD 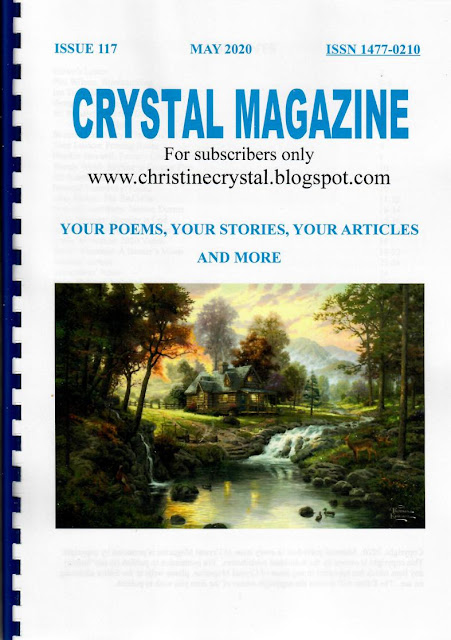 Crystal Magazine is an A4, spiral-bound bi-monthly.  Forty pages of poems, stories and articles with most genres and themes covered. Colour images.

The magazine also includes the very popular Wordsmithing, a look into the lives of writers and writing.  There are usually pages of Readers' Letters.  Subscribers' News provides an opportunity to share writing achievements. 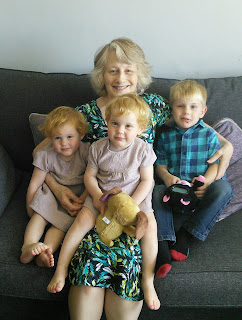 My name is Christine Carr and I am editor of a print-only magazine for creative writers called Crystal Magazine. It is a part-coloured bi-monthly (six issues a year) for subscribers only. It must be very popular because subscriptions are renewed year after year.

I also run Crystal Word Processing at the same address. Fast, friendly, reliable. Many returning clients.  The charge is £4 a thousand words, which includes editing and proofreading. HOLDER OF DISTINCTIONS

Poems, stories (true and fiction) and articles.
Any style, length and theme except erotica.
Copyright remains with the author.
Readers' Letters: kind comments or none at all.
Deadline is 15th of the month prior to the month of publication.

Crystal Magazine is for subscribers only. Subscribers are called Crystallites. If you’re not a Crystallite please don’t send any work.

Alternatively, you can send a cheque or Postal Order, payable to Mrs C Carr, to:

FREE
Sometimes there are free booklets and bumper issues at no extra cost.
There have been free gifts.

SUBSCRIBERS' NEWS
The opportunity to share your writing news. 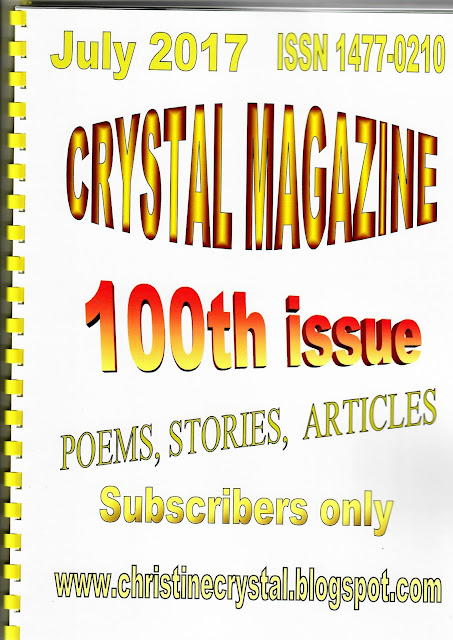 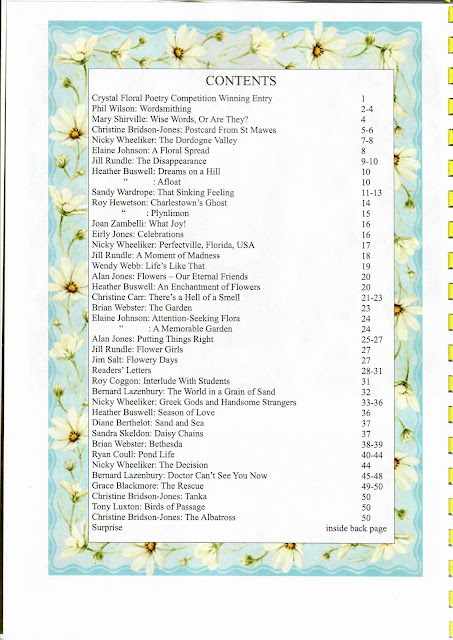 If you use the payment button to subscribe to my magazine, PayPal will set up a Payment Profile with automatic recurring payment. This means in a year's time your subscription will automatically be taken from your PayPal account.  So no need to worry about remembering when your subscription is due.  You don't have to do anything.

Of course, if you no longer wish to receive Crystal Magazine you can either contact PayPal direct to cancel or myself and I will issue a refund through PayPal.

SUPPORT FOR THE NATIONAL AUTISTIC SOCIETY


A new book, an anthology of poetry, has just been published by local man, Jae-Alexander Linsey, with all the profits going to charity.

It all started from a tragedy and ends, now, with The Mortal Man ‒ a splendid anthology of poetry from a range of fine poets who have lent their poetic skills in support of a charitable cause, The National Autistic Society.

The tragedy is not that David Thomas Webb was autistic, because many of the hardships and heartaches encountered by him and his parents were seen as challenges and were largely overcome. So well were the difficulties met by them that David was able to struggle towards, and eventually achieve, a place at university, studying for a degree in Computer Science.

The tragedy is that David had barely started his university career when his body was discovered in his rooms just a few months after he arrived there. He was only nineteen. Since that awful day his parents have been tireless in their bid to raise money; firstly, in support of The National Autistic Society through the Just Giving website and, secondly, to name a star after him. As his mother, the Norfolk poet Wendy Webb, says, “Dave was truly a star, full of energy, so bright and so hard to live with.”

This eclectic poetry collection has been compiled in tribute to David and in aid of The National Autistic Society, with a foreword by its President, Jane Asher. The poems are in a variety of styles by poets from around the United Kingdom. They include the late and much lamented Black Country poet, Geoff Stevens, whose long-term partner, Geraldine Wall, has released three poems from his heritage. Also included are two Poets Laureate: Mark Neil of Milton Keynes, and Walsall’s Ian Henery, whose energy and enthusiasm started the ball rolling for this book following a conversation with Wendy Webb.

The Mortal Man is now available from www.lulu.com at £8.99, all profits going to The National Autistic Society. www.lulu.com/spotlight/TheMortalManAnthology For further information please email to mortalman@albarz.co.uk


Donations can be made using the following details:

SURPRISE COMPETITION (open to everyone) ENTRY £1.23